Irony Alert: Get Politics Out Education

Governor Pence has doubled down on education privatization. His goal is, apparently, to strip teachers of any remaining professional decision making, continue the Daniels plan to bust the unions, starve public schools by diverting funds to charters and vouchers, and finally, oh, finally, overturn the election of 2012 in which Glenda "the National Board Certified Teacher" Ritz defeated Tony "the cheater" Bennett.

FROM THE DESK OF MIKE PENCE

Here is the portion of the Governor's op-ed in which he itemizes his plans for the destruction of public education in our state...

Here's how we will improve [sic] education in Indiana


First, traditional public schools need more freedom to innovate and pay good teachers more. That’s why I have proposed Freedom to Teach schools. Under my plan, schools can submit plans to the State Board of Education requesting waivers from a wide range of requirements to gain the freedom they need.

Second, because public charter schools have improved choices for families and helped raise the quality of traditional public schools through competition, I have proposed that we establish “fairness in funding” in our public school system. Charter schools operate at a significant per-pupil funding deficit. We need to fix this to see more high-quality charters open their doors in Indiana.

Third, we need to lift the dollar cap on vouchers and increase the amount of the tax credit available to people who provide private scholarships to disadvantaged kids. This will create more choices for more families and raise outcomes for kids.

Fourth, we need to change how we fund career and technical education courses so that more high school students choose to specialize in a course of study leading to high-wage career options, whether they want to get a job or go to college after graduation.

Fifth, for us to fund excellence and increase choices for families, we need to fix what is broken. I have proposed that we get politics out of education in Indiana and begin fixing the overly complicated way we oversee education policy in Indiana. I have chosen to dissolve the Center for Education and Career Innovation as a first step. I have also called on the General Assembly to allow the State Board of Education to elect its own chair, a common practice among state boards in Indiana. 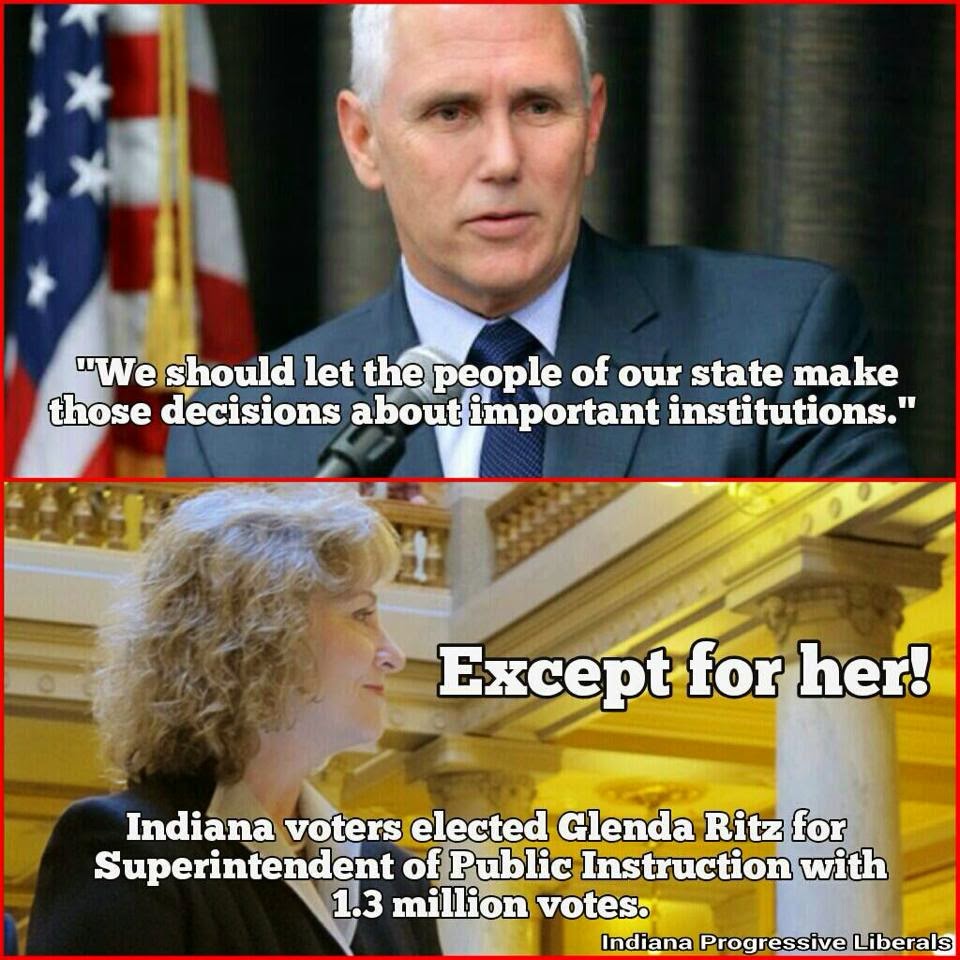 Here's my take on what the Governor is actually saying.

Freedom to Teach means: Take away any remaining job protections from teachers, increase merit pay which has never worked, and cause more dissension and demoralization among our state's public school teachers. I don't even want to think about the "wide range of requirements" that schools will be able to sidestep. We've already reduced entry into the professional education world through REPA III...what next?

Competition? The only way you think that competition works in public education is if you think that teachers are purposely withholding their "good teaching" for some reason. If that's true, then you might as well stop reading this because we'll never, ever agree about education in the U.S. I have spent nearly 40 years working and volunteering in three school districts and 6 elementary schools in Indiana. I have worked with hundreds of teachers. I never saw anyone do less than try their hardest to reach students. It's absolutely true that not every teacher I worked with was the "world's best educator," but every single person came to school every day with the intent of doing the very best they knew how to do. You are absolutely wrong if you think that competition will make teachers work harder. /endrant

Lift the Dollar Cap on Vouchers: Give churches more tax money and allow them to spend it on whatever they want, again, with lack of public oversight.re

Get Politics Out of Education in Indiana: The irony meter just blew up on this one...The Governor is still angry that Superintendent Ritz beat his buddy Bennett, and garnered more votes than he did in the process. In order to "get politics out of education" he proposes to take away her impact on the SBOE by reducing her to "member." This will have the effect of nullifying the 1.3 million votes which were so thoughtlessly cast by the Hoosier electorate.

Governor Pence is apparently interested in one thing...redistributing tax money to religious and corporate entities. There is no research basis for what he has chosen to do to public education (except for the research that indicates his friends and donors will make money), but with his minions holding a supermajority in both houses of the state legislature, he will do what he wants. Never mind what is actually good for students. 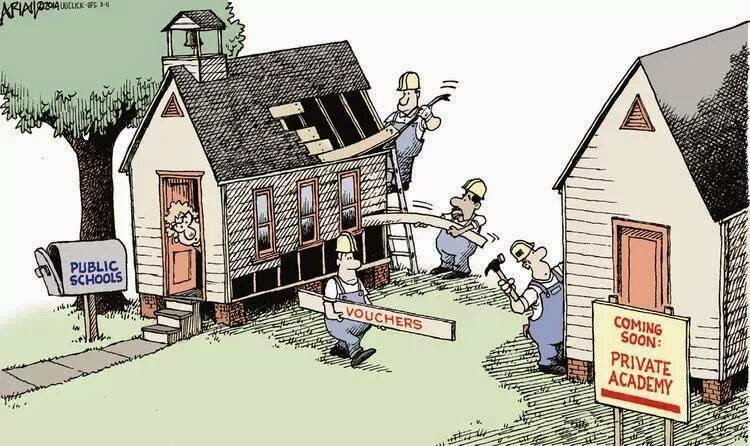 DISHEARTENED, BUT NOT SURPRISED

Finally, here is an excellent response to the Governor's plan from Julie Hollingsworth, a member of the school board for Fort Wayne Community Schools.

I was disheartened to hear our governor state his education agenda for the 2015 legislative session. Disheartened, but not surprised. Same agenda, research and results be damned.

More merit pay. Ignore more than 20 years of research indicating that, in a collaborative profession such as teaching, merit pay does not improve student performance.

Raise the voucher amount. Despite – as we have seen locally – some schools have increased tuition just to get up to the current amount.

More funding for charter schools. Ignore the fact that the majority of charters are failing miserably on their promise to deliver a better educational model.

Here is the height of hypocrisy: Sell the concept of charters with the myth that we are putting all this money into public education with poor results then, when charters get poor results, the solution is more money.

And then there was something called Freedom to Teach, a to-be-defined program that gives some schools freedom from some rules. I had to laugh at that one. Would Indiana teachers like freedom to teach? I think they would.

They would like freedom from the smothering effects of tests which now determine teacher evaluation, student promotion, teacher pay, school grades, student graduation – and the governor wants to add school funding to the list. Ignore the fact that these tests were never designed for those purposes.

Teachers would like freedom from teaching students how to take the tests, since they will be so different this spring.

Teachers would like freedom from testing mandates which demand every student advance at the same rate and learn to read at the same time, ignoring developmental realities.

Teachers would like freedom to engage students with more projects, more science, more arts, music and physical education, more pleasure reading, more field trips and, yes, more recess – all things that have been proven to improve student outcomes yet have eroded as tests and more tests and test prep narrow the curriculum.

By all means, governor, give Indiana teachers freedom to teach.