Look, I understand why Rod Gardin, the superintendent of East Porter County School Corporation in northwest Indiana, wrote the op-ed on NWI.com titled Public schools outperform charter schools. Studies across the nation have shown that charters don't perform any better than regular public schools given the same students.

I get it...professional educators are tired of being insulted and slandered by politicians and pundits and want to strike back with the truth. So Superintendent Gardin compared the letter grades assigned to schools by the Indiana Department of Education, based mostly on student test scores, and discovered that a higher percentage of public schools got A's than charter schools and a higher percentage of charter schools got F's than public schools...and so on for B's, C's and D's. 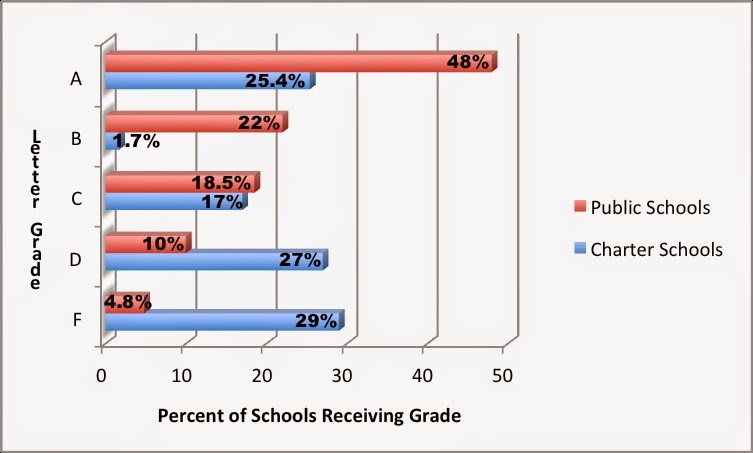 BUT IT CUTS BOTH WAYS

Based on those tests charter schools score lower than public schools...and Superintendent Gardin, in his attempt to defend and support his public schools -- for which I commend him -- wants everyone to know it!

Do we wait till then to stand up and claim that Indiana's A-F School Accountability grading system is worthless because "there's more to school than test scores"? Do wait till then to remind everyone that standardized test scores have more to do with a family's income than a student's teachers?

Poverty, not "bad teachers," is the main cause of low achievement in America's public schools and anyone involved in public schools knows it [even Arne Duncan and other "reformers." They know it, too, but saying "We need to reduce poverty" doesn't get the campaign donations that yelling "Teachers unions are destroying America!" does].

Instead, we need to say, right now, that Indiana's A-F School Accountability grading system is flawed. It doesn't give a real-life picture of what goes on in a school. We need to say, right now, that grading school systems, schools, and teachers with students' scores on standardized tests is a misuse of data. We shouldn't join in the misuse of standardized tests just when it suits us.

DEFEND YOUR SCHOOL WITH TRUTH

Instead of defending our schools by using test scores to compare them to private and charter schools we need to defend our public schools by informing people of the advantages of public education.

Public education is a public good...like public libraries, public parks, municipal water systems and roads. Our states and communities should support public education, not because public schools are better than private or charter schools (though they might be), but because they belong to all of us and are good for our communities.