The Future is Not a Priority

The Southern Education Foundation (SEF) has released a research bulletin which reports that for the first time in 50 years, more than half of America's public school children are low income. Indiana is in the middle of the pack with 49%.

Why isn't this front page news in every newspaper, and the top story on every TV news report? Nearly half of Indiana's public school students are low income. Is this the economy the Governor touted in his 2015 State of the State address?


Together we’ve made Indiana the fiscal envy of the country. We’ve balanced budgets, funded our priorities, maintained strong reserves, and still passed the largest state tax cut in Indiana history.

Does this mean that almost half of Indiana's public school students are not a priority? 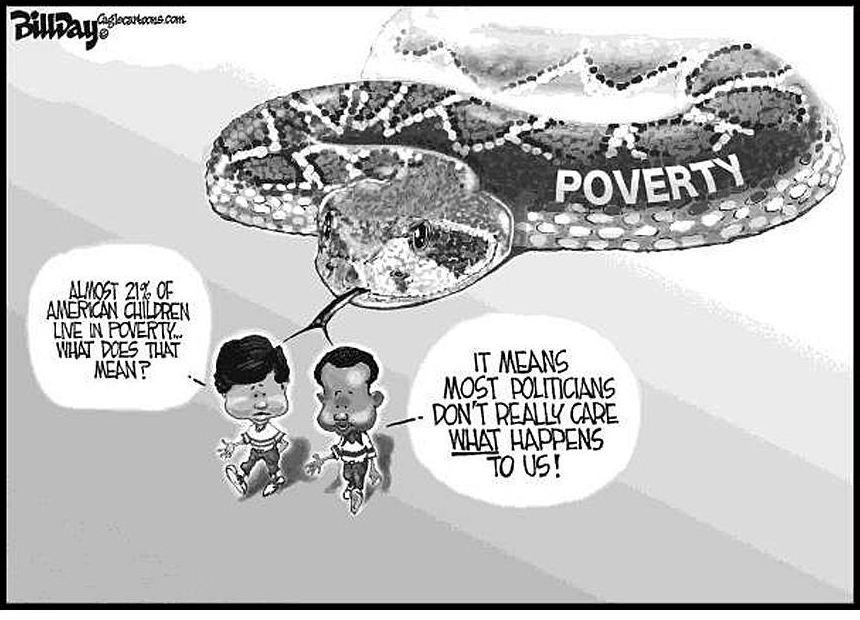 The state rankings are based on the free and reduced lunch counts for schools. When the SEF report looked at ONLY FREE lunch, a measure of higher poverty, it showed that Indiana has 41% of it's public school children in this category. Two out of every 5 children in Indiana's public schools live in poverty severe enough to qualify for a free lunch. To put this in perspective, the income for a family of four is 100% or less of the federal poverty level of $23,850 per year. In contrast


Average CEO compensation was $15.2 million in 2013, using a comprehensive measure of CEO pay that covers CEOs of the top 350 U.S. firms and includes the value of stock options exercised in a given year...

Numerous research studies have linked low school achievement with poverty. At this point it's clear that the primary method for increasing low achievement in America's public schools is to decrease poverty. Politicians have not accepted the responsibility for creating jobs and raising people out of poverty. They have been too busy fighting each other over power and campaign contributors...

Political forces have manipulated the message in order to help their friends and donors in corporate America reap the economic windfall of public tax money for public schools, and to deflect the problem away from their own inability to work together to solve the problem of rampant poverty among our children. Instead of taking responsibility politicians have dumped all the responsibility of low achievement on the public schools.


Even though the data points to poverty as the big flashing neon sign of "Hey, here it is!" Steinberg and Sartain walk right past the blinking brightness to select again the teachers and principals as the cause. This is not so much mis-reading data as simply ignoring it. I'm not sure why they bothered with the big long article. They could have just typed, one more time, "Poor students do worse on standardized tests, therefor we conclude that the only possible explanation is that all the bad teachers in the world teach in high-poverty schools." Also, I've noticed that whenever a building is on fire, there are firefighters there with big red trucks, so if you never want your building to burn down, keep firefighters and big red trucks away.

Protect children from the impact of poverty


The results of these studies show that our unspectacular test scores are not because of teachers, teachers unions, or schools of education, but because of poverty. The US has an unacceptable 25% rate of child poverty, higher than all other industrialized countries, and much higher than it was in the past: the lowest recorded rate of child poverty in the US was 13.8%, in 1969. In contrast, high-scoring Finland has only 5.4% poverty.

The solution is not "shutting down failing schools," as proposed in the article. Studies show that school and teacher-factors play a small role in student academic success. Far more important is dealing with out-of-school factors, specifically the effect of poverty. Poverty means food deprivation, lack of health care, and lack of access of books. The best teaching in the world will have little effect when children are hungry, ill, and have little to read. 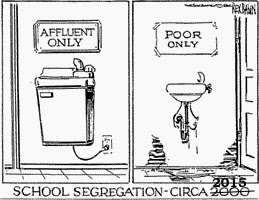 THE FUTURE IS NOT A PRIORITY


This is absolutely despicable. Everyone of us should realize these youngsters are the future of our country and yet, we allow this to happen...

We have enough money in America to ensure that no child has to go hungry...to go without health care...to go without a good neighborhood public school. But that's not a priority.

~~~
Here are a few articles about achievement and poverty...