Hill fight on No Child Left Behind looms

As I write this there is a debate going on about Senator Alexander's proposals for the reauthorization of the Elementary and Secondary Education Act, the newest version of which is No Child Left Behind.

A main focus is testing. The conversation is mostly about frequency of testing with little discussion of the need for testing and its uses...

The Obama administration is for keeping the testing policy as it is...


Education Secretary Arne Duncan outlined his priorities in a speech, saying he wants to keep many of NCLB’s testing requirements, as well as the requirement that the government intervene in low-performing schools...

There’s little recent polling, 2012 survey by Education Next found that only 14 percent of parents oppose the annual testing requirement, and a majority of parents supported it...

The KDP/GALLUP Poll of 2014 indicated that a majority of public school parents were not that crazy about standardized testing (see column 2 in the image below)...I suppose it depends on how the question was formatted. 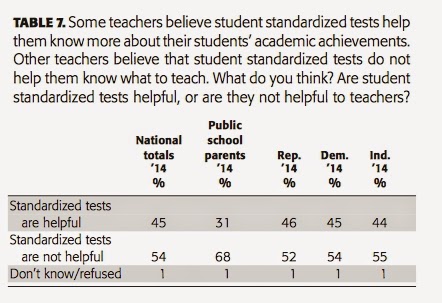 The truth is that schools with low achieving students are most often schools with high poverty. The problem is poverty, not failing schools. Who's at fault? Everyone! Schools need to improve, of course, as do government services and responses to the growing poverty in America (see The Future is Not a Priority). When are policy makers going to accept their share of the responsibility?


Pushing low-performing schools to get better was a core part of No Child Left Behind...

Duncan has been clear that he thinks keeping the interventions in poorly performing schools should be included in any NCLB rewrite...

Since the assumption is that "failing schools" are the fault of teachers we mustn't forget to offer more money to those teachers who teach to the test. Merit pay is based on the incorrect assumption that teachers aren't trying hard enough...that somehow we're keeping the really good teaching strategies hidden and more money will help us get higher test scores. "Teacher quality," below, is defined simply as higher test scores.


It’s important to keep in mind that many Republicans in Congress strongly support merit pay and other strategies to improve teacher quality...

Two days ago I wrote about the Southern Education Foundation's report on student poverty (see The Future is Not a Priority).

This four minute video news report reminds the watcher that teaching is not only academics and test scores.


I talked with one kindergarten teacher, a veteran teacher from New Mexico. She teaches in downtown Albuquerque. And she told me that the first hour of her morning, she does an inventory to check her kids, have they eaten, are they clean?

She keeps a drawer full of socks, shoes, clean underwear, toothbrushes for them just to take care of their immediate needs.

She can’t even focus on the academics.

Is it a classroom teacher's responsibility to provide those support services for children in poverty? If that's part of the job description then teachers need more money, lower class sizes, and credit for dealing with the high levels of American childhood poverty that politicians and policy makers ignore.

Our Teacher Diversity Problem Is Not Just About Recruitment. It’s About Retention.

It's hard enough to keep half of America's beginning teachers long enough to become career teachers. It's even harder to keep minority teachers in a career that burns them out quickly...


Nationwide, we have a teacher diversity problem. This year, for the first time in our country’s history, a majority of public school students are children of color. But most teachers—82 percent in the 2011-2012 school year—are white. That figure hasn’t budged in almost a decade.

The knee-jerk response is to blame the minority teacher shortage on inadequate recruitment efforts. But key data suggests that we also have a largely unacknowledged and unaddressed problem with retention. In other words, our schools are churning and burning teachers of color at unconscionably high rates. 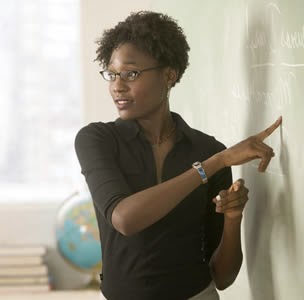 We live in a world where test scores mean everything...from school quality, to student effort, to teacher competence. We must stop misusing standardized test scores.


The illusion has been created that having a great teacher is an outlier and not the norm. There is a quote from Metro Nashville School Board member Mary Pierce in a recent Salon article that says,“If the school is doing the job it’s supposed to be doing, then the test scores will follow.” This is indicative of the culture we’ve created. The test scores aren’t generated to assess the needs of the child and give guidance on a direction for instruction; they are seen as a method for a teacher to demonstrate their competence. In essence, we’ve morphed into a culture of guilty until proven innocent.

Texas: Lt-Gov Asks Business and Industry to Shape Policy, But Not Educators

Diane Ravitch noted that the new Lt. Governor of Texas formed a "special council" to deal with state issues, including education. No educators were invited.

She reminded us that this also happened in Nevada. The Governor formed a "Business Roundtable on Education Policy" which included "leaders," but no educators (see the image below).

Is education the only field where practitioners are the only ones excluded from participation in policy making? Arne Duncan is a basketball player/Sociology major. Bill Gates is a technology expert/college dropout. Rahm Emanuel, Michael Bloomberg, Joel Klein, Eli Broad...the list goes on and on. When it comes to education policy, educators need not apply.


...55 leaders of business and industry to advise him on state policies, including education. There do not appear to be any educators on the panel...

Here are the articles linked to in Diane Ravitch's entry...


...Lt. Gov.-elect Dan Patrick said Thursday he had appointed a 55-member special council made up of Texas business and industry leaders...

Issues like immigration, health care and education would be considered by the committees, he said, and those topics might also be added as separate panels in the future.

Gov. Sandoval calls for a legacy of ‘leadership, vision and courage’ in starting second term


Sandoval, who easily won a second term in the Nov. 4 general election, made the event about Nevada’s schoolchildren, saying he will dedicate his next four-year term to helping the state’s children succeed.

Sandoval asked that all Nevadans work together to ensure future families inherit a legacy of “leadership, vision and courage.”

This image is from the Nevada governor. It defines who will be on the "Business Roundtable on Education Policy." Perhaps the last category -- "Any other members who the Governor deems necessary" -- will be the lone educator's spot. 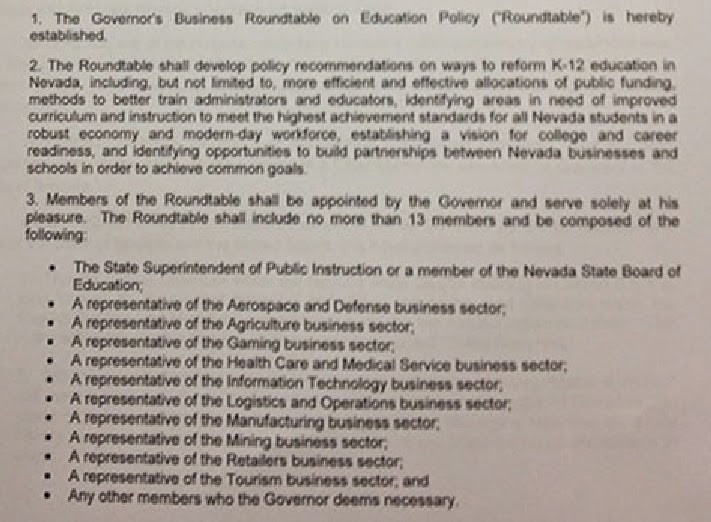 In the "why does this surprise anyone" department -- those children whose parents make reading important will read more. Those students who are given time to read at school will read more.


Fewer children are reading books frequently for fun, according to a new report released Thursday by Scholastic, the children’s book publisher.

There were some consistent patterns among the heavier readers: For the younger children — ages 6 to 11 — being read aloud to regularly and having restricted online time were correlated with frequent reading; for the older children — ages 12 to 17 — one of the largest predictors was whether they had time to read on their own during the school day. 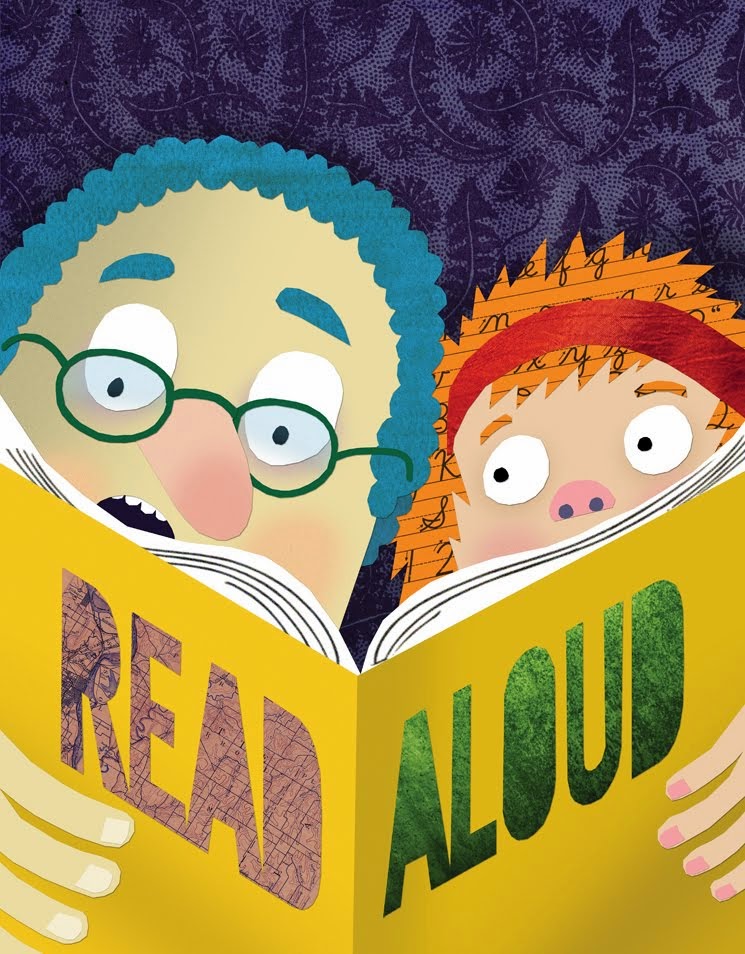