Arne Duncan's "major speech" on testing reminds us that he has two core (excuse the pun) beliefs about the subject...as Peter Greene of Curmudgucation explains it in What Duncan Got Wrong About Testing...


It wouldn't be a Duncan speech about testing without the presumption that schools are liars and parents are dopes.

Duncan apparently believes that parents have absolutely no way of knowing how their children are doing in school without federal requirements for testing in every grade from third through eighth (One might wonder why he isn't calling for testing in kindergarten, first and second grade, like we are here in Indiana, but let's leave that for another time).

According to Duncan, parents apparently aren't capable of communicating with schools to find out what's going on in their children's third through eighth grade classrooms. Just picture poor, distraught Mom sitting at home or in her cubicle at work distracted and unable to function from worry about how her little ones are doing. Oh...thank goodness for the federally mandated testing in grades 3 though 8. If she can just hold out till the scores come back...


Will we work together to ensure every parent’s right to know every year how much progress her child is making in school?

Because only with the intervention and oversight of the federal government can parents have a clue about how their children are doing in school. And only a federally-mandated BS Test can give them a picture of their child's education.

And what about teachers and schools? Duncan seems to think that teachers and administrators 1) don't communicate with parents, 2) and if they do they lie and don't tell them what's really happening in their child's classroom. Does he think that teachers won't really know what's going on with their students until they are tested by the always accurate Standardized Test? It seems that way because he said,


I believe parents, and teachers, and students have both the right and the absolute need to know how much progress all students are making each year towards college- and career-readiness. The reality of unexpected, crushing disappointments, about the actual lack of college preparedness cannot continue to happen to hard-working 16- and 17-year olds – it is not fair to them, and it is simply too late.

Arne Duncan seems to think that a struggling student won't get any attention until they're late in their high school career...and then it will hit them all of a sudden...that they're not prepared for college. He assumes that teachers won't know which students are struggling and that parents won't care enough to keep track of how their children are doing!

The sad thing about this is not the level of insult that the nation's Secretary of Education heaps upon parents and teachers. It's that Duncan actually seems to believe that there is no communication between schools and parents without the bludgeon of a federally required standardized test every year. He believes it...and people believe him! 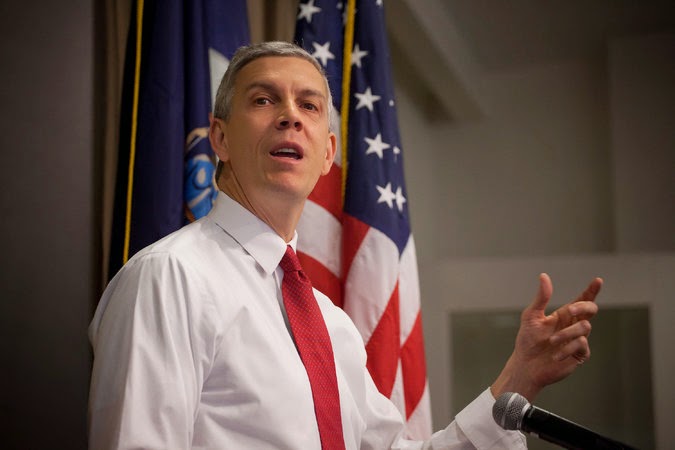 THE U.S. CHAMBER OF COMMERCE DOUBLES DOWN

The U.S. Chamber of Commerce, then, seems to agree with Duncan that federally mandated tests in grades three through eight are all that's keeping parents informed about what's happening in school. Just like a test for some mysterious medical malady, you mustn't forego a standardized achievement test for even one year because then you'll never know how your child is doing in school.

How do the Finns...who don't use standardized tests at all...achieve at the highest level in the world? There must be some secret that American teachers and parents don't know about...


And while there are no annual standardized tests there are still ways that the school system checks for quality. Progress is monitored at both the local and municipal level in a variety of ways, including assessments throughout the school year. But the design and timing of any exams are left up to the teacher.

What about elite, expensive, private schools (or even not so elite, expensive ones)? Do they test their students every year using standardized tests? Do the parents of students attending these schools have any idea how their children are doing in class?

Duncan, who never has taught in a public school...and who has never even attended a public school...has absolutely no idea about what goes on in public education around the country. Here are two facts for Duncan to learn...
Duncan also should learn that demoralizing teachers, closing public schools, and opening charters hasn't helped children achieve higher.

The U.S. Chamber of Commerce is right behind him supporting charters and privatization. This despite the fact that massive testing programs, charters and other "reform" moves towards privatization of public education over the last decade and a half haven't improved student achievement.

The "need" for standardized testing

Duncan also believes...and one might assume that the U.S. Chamber of Commerce agrees...that there is a virtual epidemic of "bad teachers" in the U.S. Why else would all those students in poverty score so low on achievement tests? The assumption is that teachers are 100% responsible for all learning that takes place in a child's life.

The truth is that the U.S. Chamber of Commerce is lying to the American people in its claim that the only way to know how children are doing academically is to test them every year...and it's Duncan who is clueless.