THE BEST IN THE WORLD

America's public schools are not "failing." However, that doesn't mean that they can't improve. After reminding us how the nation's public schools are the best in the world, Rob Miller goes on to remind us that many criticisms of public education are true. It's up to us to make public education the "unequivocal BEST choice for America’s children."


...public education is an absolute right for every child in America, not just the privileged. No other school system anywhere in the world exceeds the United States in providing free access to education for everyone. And that, alone, makes us exceptional.

I got to choose private schools, but will vouchers really help other kids make it?

Indiana's voucher program began as a way to "save poor children from 'failing' schools." It was restricted by income, and parents had to try the public schools before they could get a voucher to send their child to a private school. It didn't matter that it was the state, not the schools that was "failing" the students. All that mattered was that privatizers rationalize a way to give tax money to private schools and churches.

Once it was clear that private and parochial education didn't provide better services for poor children, the argument changed.

The voucher program has been expanded to include middle class students, and students who have never set foot in public schools. Public dollars are being used to pay for religious instruction.

The call is now for "choice." There's no attempt to claim that private and parochial schools are better. The entire reason for the voucher program is now "choice."

From Emmanuel Felton in The Hechinger Report


School choice by its very nature uproots its customers from their communities, increasing the proportion of Americans without any stake in what’s going on in public schools, the schools that will always serve the children most in need of attention.


Whether you’re trying to measure proficiency or growth, standardized tests are not the answer...

Federal law requires that students with special needs have an IEP, an Individual Education Plan. It's required that the IEP describe a modified program appropriate to the student. Yet, now we find that the same Federal laws which require those accommodations for special needs students, requires that they, along with their teachers and schools, be punished for those accommodations.

Since charter schools and schools accepting vouchers enroll fewer special needs students than public schools, it is the "grade" of the public schools which will suffer because of this loathsome and abusive practice. It is the students who were told what they needed to do, and who did it, who will be told, "your diploma doesn't really count."


...students who struggle to earn the general diploma and likely wouldn’t complete a more rigorous course of study, the change seems to send a message that their efforts aren’t good enough. About 30 percent of students who earn a general diploma are special-needs students. 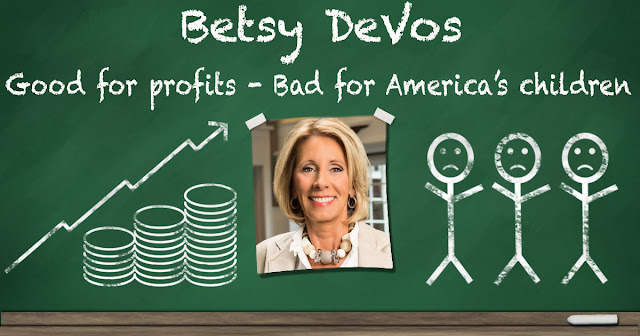 After Six Months, What Has Trump-DeVos Department of Education Accomplished?

The sooner this administration is history, the better.


To summarize—Betsy DeVos has said she intends to “neutralize” the Office of Civil Rights, which can only be interpreted as weakening its role. DeVos is delaying rules to protect borrowers who have been defrauded by unscrupulous for-profit colleges. While DeVos promotes school accountability through parental school choice, her staff are busy demanding continued test-and-punish accountability from the states. And finally, the D.C. voucher program remains the only federally funded tuition voucher program, despite that DeVos has declared the expansion of several kinds of school vouchers to be her priority.

From Valerie Strauss, in the Answer Sheet


We should celebrate the fact that unlike some countries in the world, the United States makes promises that we will never send any student away from our schools. Our commitment is to educate every student. Period. It’s but one of America’s many compelling attributes.

The attack on public education, and on eight year old children in particular, continues. Florida uses a "third grade reading test" that students must pass, else they face retention in grade. Just like Indiana...
Just like Ohio...
Just like Mississippi...
and Oklahoma...
and Arizona...
and Connecticut...
California...
Michigan...

From Peter Greene in Curmudgucation


What sucks more is that the final outcome maintains Florida's power to flunk any third grader who refuses to take the test, regardless of any other academic indicators. In fact, the whole mess of a ruling would seem to suggest that Florida intends to ignore the part of ESSA that explicitly recognizes parental rights to opt out.

...the state had to explicitly declare that it doesn't believe in the grades on report cards and that it values test-taking compliance above all else AND that it fully intends to ignore the opt-out portion of ESSA. So the face of education policy continues to be ugly, but at least they were required to show it without any mask or make-up. 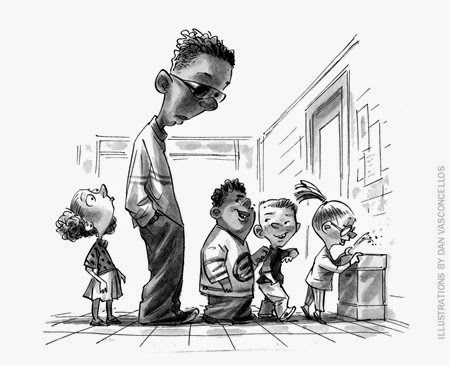 8 steps to destroy public education...
This quote deals with step 5 in the process.

From Lawrence Mishel, president of the Economic Policy Institute.


“We are moving into a world where fewer people are trying to enter teaching, in part because the profession has been degraded by misguided accountability measures and also because of the erosion of pay,” says Mishel.


It's so easy to scapegoat teachers' unions for all the ills afflicting public schools ("State of the Teachers Union," The Wall Street Journal, Jul. 6). The charge is that they are more interested in protecting teachers than in teaching students ("This is what teachers unions really protect," New York Post, Jul. 6). Critics point to the success of charter schools, which are overwhelmingly non-union, as evidence.

But what these critics don't admit is that states like Massachusetts and Minnesota, which have strong teachers unions, also post high test scores. Is that merely a coincidence or is it evidence that the critics are wrong? (Correlation is not causation.) Moreover, not all charter schools post positive results by any means.