American Selfishness: Sabotaging Our Own Future.

It seems insignificant, then, to focus on something as mundane as "where will we be in 20 years" or whether our leaders 30 years hence be able to guide us through a crisis. It's much more exciting to focus on the latest outrage from Washington which, at the moment, is the President's 's**thole countries' comment.

Eventually, however, this outrage will morph into the next outrage...and we will turn our attention back to the day to day. We'll go back to work, selling goods, providing services, or, in the case of America's public school teachers, supporting every child who enters our classrooms. It won't matter where they or their ancestors came from. It won't matter what problems they bring with them. We accept them all.

As teachers, we know the importance of every child. We understand that we are educating the citizens of tomorrow. The classrooms we work in today hold the first responders, doctors, teachers, and leaders of the future. Every national, state, or municipal leader in America is someone's child, and the majority of those children grew up attending public schools.

"I BELIEVE THAT CHILDREN ARE OUR FUTURE"

It would seem logical, then, for us to recognize that the children in our public schools are the key to the future of our nation. It would seem logical that we would do everything in our power to provide all of them with the best education we can – for the common good. The nation's future depends on the quality of our leaders, and our leaders of tomorrow are sitting in our classrooms today.

Unfortunately, not all humans are logical.

Nations with high achieving schools, such as Finland, secure their future by investing heavily in education. They focus on equity...providing for all the needs of all their children. The small number of Finnish children who live in poverty (less than 5%) also have free medical care and other national safety nets to support them as they grow.

But here in the U.S. (child poverty rate – greater than 20%) we tend to focus more of our attention and more of our investment on rich children than poor children (See HERE and HERE). That might be good for our rich children, but with the increase in economic inequity in the U.S. and the removal of the few social safety nets we have, we're shortchanging a greater and greater percentage of our children.

WHY ARE WE IGNORING THE MAJORITY OF AMERICAN CHILDREN?

We're hurting ourselves and our future because we're so focused on those in power getting the most for themselves (and money equals power, so those with money get the "best" for their children), keeping poor kids poor, keeping black and brown kids poor, and keeping black and brown kids in separate schools. We're writing off a huge percentage of American children...among whom may be the people we need to lead us through the problems of the 21st century.

And for some reason...we just don't care. Oh, individually we might, and for sure, politicians will give lip service to "better education" and "opportunity for all." But as a nation? No, we don't care about public schools – at least not as much as we care about the Super Bowl, the new iPhone, our Facebook profile, getting as much for ourselves as we can...etc.

Can We Be Serious?


Poverty and racism and pedagogy and curriculum and standards and infrastructure and a plethora of threads tied up to the question "Why can't we make our schools better?" But if we dig past all of these, we get to a fairly simple answer.

As a country, we aren't serious about it.

What would wealthy parents do if their children went to school and had to spend the day with their coats on because the heat didn't work on the coldest day of the year?


Jeffrey San Filippo, a teacher at Calverton Elementary/Middle School, said that when he arrived at work Tuesday morning, the building was “extremely cold.” Later in the morning, the temperature in his classroom was in the mid-40s. After lunch, students gathered in the cafeteria to finish the day “because the classrooms were entirely too cold,” he said.

Students were wearing gloves and winter coats, San Filippo said. Some called their parents and asked to go home.

“I think this really just shows Baltimore City’s facilities have been underfunded for years, and this is what happens when you have a cold spell,” he said. “The boilers can’t keep up, and students are made to suffer.”


Years of deferred maintenance projects left city school students shivering in classrooms with temperatures below 50 degrees — again. This news is not exactly, well, news. Six years ago, I was also a Baltimore City teacher forced to decide between upholding the uniform policy (no coats or hats!) or letting students freeze in my classroom. It was precisely the necessity of purchasing my own space-heaters or copy paper or books that pushed me to leave the classroom and commit to ensuring resource equity through education finance innovation.

Why are other countries able to take care of all their children...to prepare properly for the future...but we're not?

Simple...it's good old American selfishness. "I've got mine and if you don't have yours it's not my problem."

This is the individual equivalent of "America First." We're going to close the door on immigrants because whatever's happening to their country isn't our problem. People fleeing from war, famine, and disease...not our problem.

It's how we do things in the U.S. My kid goes to the best school in the state. Your kid's school has no heat, no books, no toilet paper? Not my problem. The new tax law...which provides for the permanent well being of the corporate sector, but expires for the middle class and low income Americans...is an example of this. The wealthy have theirs...if you don't have any, too bad, but it's not my problem.

We're living through a national epidemic of selfishness and stupidity.


“Fuck you, I got mine” is a lousy ideology to build civilization on.

It seems we would rather sabotage our own future than help others. 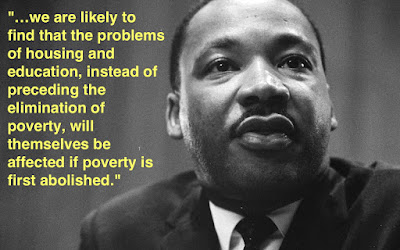