(Edited and reposted from last year) 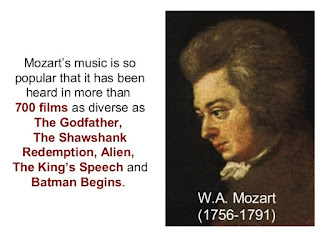 Mozart was born in Salzburg, Austria in 1756. In past years, I showcased some of his early works...a piano piece he wrote when he was five, his first symphony written at age eight, and his first opera written when he was eleven!

Here are five of his concertos (some complete, some excerpts)...for Horn, Bassoon, Oboe, Clarinet, and Flute. The definition of "concerto" has changed over the centuries and continues to be loosely defined, but generally, a concerto has three movements in which one solo instrument is featured. Accompaniment is usually with an orchestra or chamber orchestra. [FYI, a symphony can resemble a concerto in style and format, however, usually a concerto highlights one solo instrument throughout.]

The nice thing about these videos is that they are of live performances. Enjoy watching the musicians – soloists, orchestra members, and conductors – dance in their own special ways to the music. Most are "head dancers" but quite a few of them move their arms or sway at the waist. Very few, if any, keep still while they play.


The first movement of the Oboe Concerto...


...the first movement of the Clarinet Concerto...


...and the first Flute Concerto.