...Respect me as a human being


"A life is not important except for the impact it has on other lives."

"I'm not concerned with your liking or disliking me. All I ask is that you respect me as a human being." 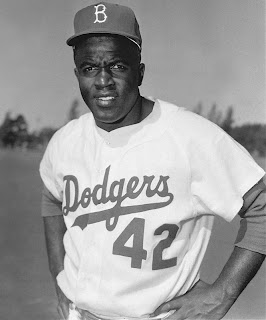 Today we must balance the tears of sorrow with the tears of joy. Mix the bitter with the sweet in death and life. Jackie as a figure in history was a rock in the water, creating concentric circles and ripples of new possibility. He was medicine. He was immunized by God from catching the diseases that he fought. The Lord's arms of protection enabled him to go through dangers seen and unseen, and he had the capacity to wear glory with grace. Jackie's body was a temple of God. An instrument of peace. We would watch him disappear into nothingness and stand back as spectators, and watch the suffering from afar. The mercy of God intercepted this process Tuesday and permitted him to steal away home, where referees are out of place, and only the supreme judge of the universe speaks.


I told my father when I grew up I was going to be a pilot. You know what he said? He said, "Ain't no colored pilots." So I told him I'd be a ballplayer. And he said, "Ain't no colored ballplayers." There were a lot of things blacks couldn't be back then. There weren't any colored pilots. There weren't any colored ballplayers in the major leagues. So it was hard to have those dreams. Then Jackie came with the Brooklyn Dodgers to Mobile for an exhibition game in 1948. I went to hear him talk to a crowd in front of a drugstore. I skipped school to meet Jackie Robinson. If it were on videotape, you'd probably see me standing there with my mouth wide open. I don't remember what he said. It didn't matter what he said. He was standing there. My father took me to see Jackie play in that exhibition game. After that day, he never told me ever again that I couldn't be a ballplayer. I was allowed to dream after that.

Clip from Baseball A Film By Ken Burns

Trailer for the movie, "42" starring Chadwick Boseman and Harrison Ford.