Fewer students are entering teacher preparation programs. This report from California is being played out across the country.

With the national obsession with testing, public school and public school teacher bashing, and privatization, where will tomorrow's teachers come from...and is it at all surprising that fewer students are choosing to enter the profession? I've asked that question before...HERE, HERE, and HERE, for example.

Is it paranoid to think that the privatizers and "reformers" who are hoping to benefit economically from the privatization of American education's $500 billion price tag, don't want life-long professional educators? Temps are cheaper and provide privately run schools with a lower overhead. Could it be that making "educator" a less-than-desireable profession has been the plan all along through the process of the demoralization and demonization of the profession? The preponderance of ALEC inspired anti-teacher legislation, blaming teachers and their unions for "failing schools", blaming public sector unions for the financial crisis, closing schools and laying off teachers - then rehiring TFA novices at a lower rate -- are these just coincidental or are the Rupert Murdochs, Arne Duncans and Michelle Rhees of the world positioning themselves to become wealthy(er) when the final collapse of America's public school system is complete?

Will it still be paranoid when we wake up to find out that most or all of the teachers in our schools are two-year temps?


...over the past five years, the teaching profession in California has been devastated by layoffs

...In addition, working conditions for teachers continue to deteriorate. The latest national survey by MetLife found that teacher satisfaction levels have plummeted, perhaps not coincidentally at about the same rate as enrollments in teacher education programs...

Another possible cause has to do with the regimen of reforms that have put unprecedented pressures on teachers as a result of the negative sanctions of the No Child Left Behind law, along with the state’s Standardized Testing and Reporting program. As described in a report by the Center for the Future of Teaching and Learning at WestEd, teachers in California faced what it called “a new normal of rising expectations and reduced support.”

Some thoughts from the comments section of this article...


...I know several college and high schools kids who were thinking of going into education who changed their minds after seeing the chaos and disrespect (not to mention the harsh pay cuts in some places) that have been directed at their teachers. If you think you can abuse people and have more sign up for abuse, you are in need of mental healthcare.

...When she announced her intention to make a career teaching special ed, she reports, many of her peers and professors reacted with horror: why on earth would she want to waste her education in… um, education...if our brighter and more talented students are being advised that public-school teaching is (except for TFA) beneath their dignity, should we be surprised when they decide to do something else for a living, or when they prove all too ready to assume something between inferiority and utter incompetence of the teachers of other people’s children?

Next week (October 7 and 8) NBC News presents its Education Nation programming, and like last year, the only education it's promoting is "reformist" education: charters, closing schools, bashing public school teachers and their schools (aka "failing schools"), testing, and vouchers.

NBC will be hosting panel discussions using corporate apologists. No serious critics of Education Nation and corporate "reform" will be on the stage. Few, if any, traditional public school educators will be on panels. The message will be that of the corporate propagandists and it will come from people like Joel Klein, Jeb Bush, and Arne Duncan. NEA President Dennis Van Roekel and Randi Weingarten, president of AFT will be there as well, though they, themselves, voice support for the much of the corporate line.


The annual Education Nation extravaganza is just over a week away. As has been widely noted, the list of presenters includes almost nobody with any actual experience working with children. No teachers. No prominent parent advocates. What is more, there is hardly even anyone we would recognize as being expert in education. No Linda Darling-Hammond, and certainly no Diane Ravitch. But there is, of course, the usual parade of celebrities and financiers -- Goldie Hawn, M. Night Shymalan, and Goldman Sachs chairman Lloyd Blankfein. Educators have been completely silenced at a summit focused on our profession.

Can you imagine a summit on healthcare that included not a single prominent doctor? [emphasis added]

Where are Educators?: Non-Education Nation is a Phony


Note, the vast majority [of] panelist[s] have no experience as K-12 educators...Do you find this strange and/or typical? Who exactly is going to help us form a collective snapshot? How about panelist Lloyd Blankfein, CEO and Chairman of Goldman Sachs, more than 15 politicians, and a gob of Hollywood panelists without educator experience. 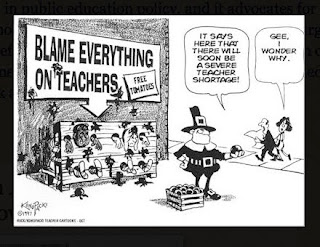 A couple of months ago, in a post titled Make a Positive Impact on Students, I wrote...


Teachers touch the future by relating to their students. Our students will learn from us and remember us for the kind of people we are, not for the homework we assign, the lectures we give, or the standardized tests we administer. Content knowledge, pedagogy and assessment are important, of course, but in order to make a positive impact on students' lives, which is after all the main reason we are in this profession, teachers must build positive relationships with them.

7 Things You Need to Know About Your Local Public School
Click here to visit the Going Public Web Site.

Why SAT scores have declined.


...the massive invasion of high-stakes tests that began with No Child Left Behind has not worked.

...poverty...students coming from wealthier families achieve higher SAT scores. As we all know, poverty has been increasing in the US. 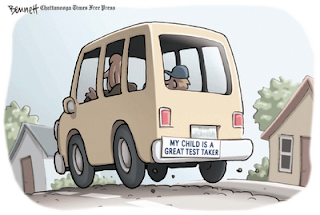 The Walton Family Foundation is no friend of public education.


Performance doesn't count so much to the Waltons when the word "charter" is in your name, of course. A Walton-financed lobby is pushing to hire a Texas-based charter school operator, Responsive Education Solutions, singled out by a Stanford University study for mediocre performance to run a white-flight middle school the Walton lobby is pushing to establish in West Little Rock. If it says charter and it hurts the Little Rock School District, that's all the Walton moneybags need to know. Sternberg is a fitting addition, based on the New York experience. Build charters; harm existing schools; have an alibi ready if the scores don't match the hype. And, throw cocktail parties on news of public school closures. 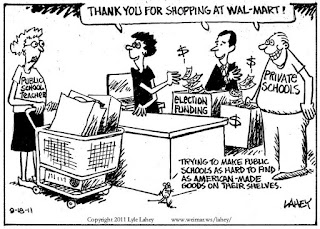 They say "students often come to their schools far behind..." Whatever happened to "no excuses"...or is that only required of traditional public schools?


The schools, many managed by for-profit companies, are great at driving up enrollment with catchy advertising. They excel at lobbying. They have a knack for making generous campaign donations.

But as new state report cards coming out now make clear, there’s one thing they’re not so good at: educating kids.

In state after state, online school after online school posts dismal scores on math, writing and science tests and mediocre scores on reading. Administrators have long explained their poor results by saying students often come to their schools far behind and make excellent progress online, even if they fall short of passing state tests.

But lately, more states have begun measuring how much students actually learn during the school year — and a POLITICO review of the data shows many cyber schools are flunking that test.