What do you do when your candidate for state education chief loses an election? If you're on the Indiana State Board of Education, or sitting in the Indiana Governor's chair, you do everything you can to make his opponent's job more difficult and you do it while acting as rude and unpleasant as you can.

Glenda Ritz, who garnered 1.3 million votes in the last election on her way to soundly defeating former state superintendent, Tony Bennett (also formerly Florida's state school chief) is being treated in exactly that way by Indiana's governor, Mike Pence and members of the Indiana State Board of Education.


...established the Center for Education and Career Innovation (CECI), a new state agency that among other duties will give the State Board of Education funding and staff separate from the Indiana Department of Education.

At this month's State Board of Education meeting, Daniel Elsener proposed a strategic planning process chaired by him, of course.


Under the plan, Ritz will be permitted to participate in strategic planning discussions, but the process of setting the state's future education goals will be directed by Elsener and the board.

How generous of the appointed members of the State Board of Education to allow the only elected member (and the chair of the Board) permission to participate in the discussions. It's interesting that the only elected official with any teaching experience in state government has effectively been stripped of her power over the public schools in Indiana.

That's not all, though. The Indiana State Teachers Association notes


The first resolution offered by member Dan Elsener called for him to chair a new committee that is tasked with setting the goals for Indiana's education system-something that has always been within the purview of the State Superintendent's office-who also happens to be the lawful chairperson for the State Board of Education. The publicly-funded "Elsener Committee" will contract out with outside consultants, spending additional taxpayer dollars along the way to do the Department of Education's work. Elsener did not give Glenda Ritz, as chairperson, the courtesy of prior notice of his resolution and then called for action on the resolution even though it was not part of the meeting's agenda. Ritz suggested Open Door Law issues with this and then abstained from voting.

Neither Pence nor Elsener had the courage to inform Superintendent Ritz before any of these "plans" were introduced. They sprang their power-grabbing plans on her without warning in a cowardly attempt to silence 1.3 million Indiana voters.

The Indiana Coalition for Public Education--Monroe County and South Central Indiana posted a summary of yesterday's State BOE meeting from one of their members today. In a post titled Does Democracy Not Count When Your Candidate Loses? Jenny Robinson wrote,


The arrogance and contempt that the appointed members of the State Board of Education are showing toward the elected state superintendent are well on their way to becoming a political liability. In the meeting on September 4, board of education member Dan Elsener sprang a proposal on Ritz in the board comment period--a proposal to give a committee headed by himself the power to do strategic planning for the Department of Education. He presented it in an aristocratic mumble, without making eye contact, as if he couldn't be bother to enunciate clearly. He nested it inside generic accolades for Indiana's academic achievements and couched it in terms of giving the state superintendent the support she deserves. Right. That's support like a dagger in the back. Should we give Elsener some credit for not pretending too hard, or was the thinly veiled insolence part of his strategy? He brushed away Ritz's objection that the rushed motion violated protocol. Board members promptly passed it.

...How did he get the authority to set the agenda for public K-12 education in the state of Indiana, instead of the superintendent of public instruction elected by 1.3 million Hoosiers? He's committed to all the reforms that Ritz ran against--the A-F system, IREAD3, the sanctity of ISTEP and testing regimens in general. Republicans need to think about how to explain this to their constituents, because it doesn't look good. What it looks like, frankly, is spitting in voter's faces.

Why are Pence and Elsener so anxious to deny Superintendent Ritz the power to do her job? She won the job fair and square from Bennett. She is a National Board Certified teacher with decades of actual experience in education.

Maybe it's because Pence, Elsener and their friends are sore losers and want to do as much damage to Ritz as they can out of spite. She beat their boy, Tony and now she's gonna pay...

Maybe it's because they are selfish, spiteful men who aren't interested in the education of children at all, only in the privatization and profit-ization of public education in Indiana.

Pence needs to be voted out of office at the earliest possible opportunity. Elsener should be fired. 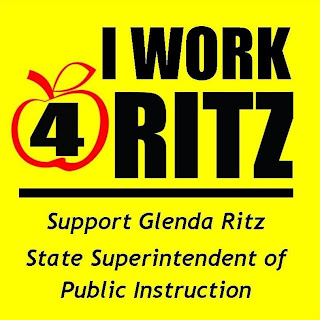