The Least Among Us

I just finished reading Jonathan Kozol's book Fire in the Ashes: Twenty-Five Years Among the Poorest Children in America.

It was an emotional book as is most of Kozol's writing. Some critics of Kozol think that's a bad thing. I happen to think that it's important for us to feel the emotion borne of empathy for those children Kozol champions.

"Reformers" claim that he uses poverty as "an excuse" and that "poverty is not destiny." In Fire in the Ashes Kozol tells stories of high-poverty children who have overcome the obstacles...as well as those who have succumbed to them. However, anecdotal evidence isn't research, and the sad truth is that, in our current inequitable society, poverty is, most often, destiny. For the most part, those who are born in poverty, stay in poverty.


"In the biggest cities, it's almost impossible to get out of poverty," he added. "If we got one of our young men into a $15-an-hour job, that would be a windfall for him. But in Washington, you can't rent an apartment or take care of your kid on $15 an hour. In Kansas City, (with) a $10-an-hour job you can rent an apartment. There's more mobility."

Kozol's focus throughout his career has been on children in poverty and their families. Fire in the Ashes continues that focus. He also continues stories begun in previous books...telling what happened to some of the children he had written about over his half-century career.

Jonathan Kozol: Fire in the Ashes and the Children of the South Bronx


...teachers invited me to visit their schools and I got to know the children - I would see them at school, at their afterschool program, at their church. The children would invite me to meet their moms and their dads, their grandmothers, and we became deep friends. I wrote three books about them over the next ten years. A few years passed, and people started asking me, "What happened to those kids? Did you keep in touch with them? How many survived and how many didn't?" So, I thought it was time to write Fire in the Ashes in order to keep faith with those kids.


THE WAY OUT OF POVERTY

"Reformers" suggest (some more strongly than others) that a good education is the way out of poverty. In What Does Obama Really Believe In? Secretary of education Arne Duncan is quoted:


“What I fundamentally believe — and what the president believes,” Duncan told me, “is that the only way to end poverty is through education.”

I won't take the time to try to argue against that. Matt Bruenig has done a good job of that in Education and poverty, again -- you can read it there.

My belief, however, is that the combination of education, social safety nets, available jobs, and a focus on economic equity in the nation would reduce poverty. That is a simplistic response, I know, but it seems to work for other nations around the world -- nations with low child poverty rates, high achieving students and social safety nets. Surely, the world's strongest nation could make it work here.

"If you look at the data for programs that help low-income people in general, the biggest people of category served is children," Tibbitts said. "Families with children disproportionately fall below poverty line. Children are expensive, and it takes a real commitment to raise kids."

The relationship between achievement and family income is well documented and we, as a nation, don't have the commitment to equity needed to help all our children. We're doing the best we can through our national selfishness to prevent poor children from getting a good education. 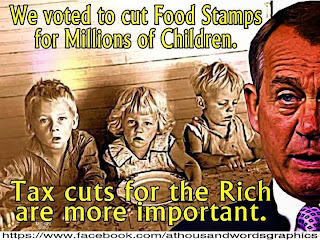 The Latest Act of Cruel and Unusual Punishment

In order to cut back, the bill tightens eligibility rules and ends a state waiver that allows able-bodied workers to continue to receive assistance if they are unemployed for more than 3 months.

Members in favor of cutting spending argue that the economy is improving so we need to target aid to the neediest people and not allow Americans to use it as a “social safety net”.

Those against cutting spending say that because 1 in 7 Americans use the program, there is evidence that it is working at a time of high unemployment and great need.

47 million Americans currently qualify for food stamps, and according to the Center on Budget and Policy Priorities, nearly 72 percent of SNAP recipients are families with children.

With one in five children living in poverty, House votes to cut SNAP food stamps


Today, (September 19,2013) the House voted on and passed the Nutrition Reform and Work Opportunity Act of 2013 (HR 3102). The legislation would cut nearly $40 billion in the next decade from federal food stamps, the Supplemental Nutrition Assistance Program (SNAP). The cuts come at a time when 21 million children rely on SNAP for food, and more than one in five children currently live in poverty.


SELFISHNESS ON A NATIONAL SCALE

Education alone can't solve America's huge child poverty dilemma and anyone who says that it can is misinformed, disingenuous, or flat-out lying. This is especially true when schools in high poverty neighborhoods are subject to less equitable funding, higher class sizes, rotting infrastructure, less experienced teachers and administrators, and fewer materials for teaching and learning.

The video below is directed at teaching non-English speakers, but it is appropriate to our discussion of poverty as well.


"...after all, if these parents can't take care of their own children, why should we?"

Politicians and policy makers are eager to place the blame on public schools and public school teachers in order to avoid being held accountable for the problems they have been unable to solve.

We know that poverty contributes to lower achievement, yet we have allowed nearly a quarter of our children to live in poverty. We are a selfish people who don't understand that we are all diminished by the poverty and inequity in our midst. We should be ashamed of ourselves.