Last year, on the sixth blogoversary I chose quotes from some of my blog entries. Most of the quotes were bits and pieces of angry tirades against privatization and against the damage being done to public education by so-called "reformers."

This year I have some questions to answer...

WHY DO TEACHERS LEAVE EDUCATION?

Nearly 50% of teachers never make it beyond their fifth year. In addition, in recent years, many veteran teachers -- like me -- retire early because of the constant barrage of insults coming from the "reformers" and their friends in the media, and among policy makers.

I sometimes despair over the "reformers'" progress in their quest to privatize and otherwise destroy America's public education system, but the video below is hopeful. In it teachers respond to "Why I stay in education." I have a similar question "Why do I still teach even after I've retired?"

When I decided in March 2010 that I was going to retire the following June, I wrote a blog entry titled, I'm ready. I had been debating whether to stay in teaching...or to leave and I was reflecting on what I was about to do.


I still have a lot to offer my students. I understand, through first hand experience, the difficulties of learning to read, ADHD, and the related emotional baggage that accompanies those problems...

I believed...and still believe...that teachers were important and that teaching was a worthwhile contribution to the community.

WHY I STAY, EVEN AFTER RETIREMENT

Eventually, I decided in favor of retirement, but the very next year, I realized that I missed working with children. So I contacted a former colleague and asked if she wanted some help in her classroom. I started working with children who were having difficulty...the same types of students I worked with when I was being paid to teach. I was essentially doing the same work as a volunteer that I did as a reading specialist/Reading Recovery teacher. I was still teaching...and it felt good. 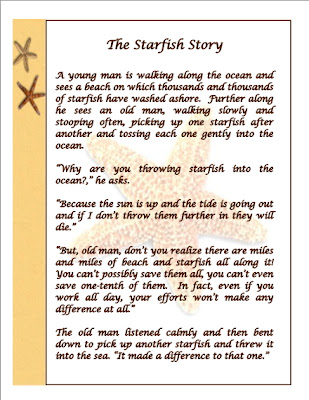 Because...
In the video below teachers from all over the country tell why they stay in education despite the frustrations caused by privatization and "reforms." (You might need to press the pause button to read some of the answers.)


Why I Stay in Education
Why do you stay in education?

Use Your Outside Voice: Because Teachers Deserve to be Heard.

You are amazing! Thank you for continuing to use your expertise to help our children.