I don't do this often, but I'm reposting what I wrote a year ago (11/9/12). It is worth another look given the current conflict between Glenda Ritz, Indiana's Superintendent of Public Instruction, and Governor Mike Pence, the Indiana General Assembly and the Indiana State Board of Education.

Indiana voters take note. You can't have it both ways. Either the elected Superintendent of Public Instruction is allowed to do the job for which she was elected, or the Supermajority on the State Board of Education, in the Indiana General Assembly and in the Governor's office will control education in the state.

It's time to write to the above officials in support of Superintendent Ritz. Next November will be the time to contact them via the ballot box! 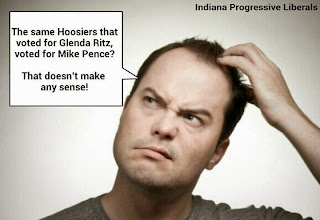 Did Bennett Really Lose in Indiana

Tony Bennett and the state Republican leaders are full of excuses as to why Glenda Ritz pulled off the upset of the billionaire-backed Superintendent of Public Instruction. Ritz raised less than $400,000 in her quest for office, while Bennett raked in over $1.5 million from rich, out of state "reformers" like the Walton family and New York Mayor and public education privatizer, Michael Bloomberg. While Bennett was schmoozing the rich and raising money, Ritz was talking to teachers, parents and concerned citizens about the corporate takeover of public education in Indiana.

Now Bennett claims that the Common Core standards are in jeopardy of being lost in Indiana...and it was the fault of the Indiana State Teachers Association (ISTA) that he lost.


The reason, Bennett said, is that he knew the Indiana teachers' unions would be "formidable foes" in any election fight, and that his policy initiatives in the last four years would generate strong opposition from some in the state education establishment. Bennett is a big national voice on issues prioritized by so-called "education reform" advocates, but his education stardom wasn't enough to satisfy Hoosier voters, who gave Ritz 52 percent of the vote and Bennett 48 percent...

Fellow blogger, A Huntington Teacher responded with another view...


...Indiana teacher unions were not, in entirety, his foes. Yes, it was a union per se; a union of teachers, parents, Republicans, Democrats, Independents, and everyone who knew what was really happening in education under Bennett.

...Bennett thinks Common Core's survival in Indiana, and also that privatization and vochers are in jeopardy in Indiana. That we can agree on. The difference - I'm not worried about it. I'm hopeful for it.

Ritz's supporters (and I'm one of them) have said that Bennett's claim that the ISTA beat him is wrong and, in truth, he beat himself. He, along with the legislature and governor, spent his term of office working to make teachers lives harder and public education weaker by supporting unproven "reforms" like vouchers, teacher evaluations based on the test, the end of collective bargaining, a state based teachers contract (as opposed to locally developed contracts), high stakes consequences for third graders and extensive support for charter schools at the expense of support for regular public schools. The reforms were popular with the billionaires who financed his campaign, but with the average teacher...and the average parent who appreciated their children's teachers...the average public school advocate...not so much.

But is that true? Is it true that Ritz was elected on a referendum on Bennett's policies?

The incoming Superintendent of Public Instruction will have a tough time changing things. The Republican leadership in the state is excusing Bennett's loss as due to his personality rather than his policies.


Top Republican officials, including the current and future governor, argued vehemently Wednesday that their education reform mandate is intact despite the defeat of Superintendent of Public Instruction Tony Bennett.

“The consensus and the momentum for reform and change in Indiana is rock solid,” Gov. Mitch Daniels said.

“Every other factor that matters is aligned in this state in the direction of progress and change and reform, of teacher accountability, of more choices for families, more ability for school leadership to lead.”

Gov.-elect Mike Pence said his election on an agenda of education change, as well as the House’s picking up a supermajority of members, points to Hoosiers supporting continued progress in the area...

“This is not an indictment in any way of reforms,” [GOP House Speaker] Bosma said. “Some of the education reform controversy deals with the tone and presentation of the reforms and how it’s explained. Occasionally the discussion moved into arenas that teachers found offensive.”

Electorally, they are correct. Those who voted against Bennett blamed him for all the losses felt by the public schools in Indiana...the difficulties at the local school level of finding enough money to keep programs alive and schools open...the takeover of local public schools by corporate charters...the loss of money to public schools due to vouchers...the pressure to adopt the Common Core. Nevertheless the people of Indiana voted the politicians who legislated the destruction of our public schools into law right back into office.

The voters in Indiana, while scapegoating Bennett for the attacks on public education which he articulated and represented, ignored the legislators who also made it happen. The GOP leadership is right to believe that "Hoosiers [support] continued progress in [education]" -- meaning that by our votes, we've agreed that everything Bennett did should continue.

The legislative agenda of Tony Bennett and his Department of Public Instruction was upheld and approved by the voters in the last election.

Glenda Ritz may have been elected because people didn't like Tony Bennett. I know she wants to change those policies he put in place...but it's going to be tough for her to change the ones which have already been turned into law, because the voters spoke clearly on November 6th. School "reform" in Indiana got the go-ahead at the ballot box.

I would love to be proven wrong. I would love to see Superintendent-elect Ritz give us real school reform...more support for struggling schools instead of closures and punishments...real teacher evaluations based on professional development and "best practices" instead of student test scores...smaller class sizes...local control of schools and finally, less testing and more teaching. But I doubt that she can do it alone...with the Governor and a Supermajority in the legislature bound to stick to the status quo.

Her campaign literature emphasized things like...
Those of you who voted for Ritz...but then voted for your legislator who did exactly the opposite of what she wants...it's time to start writing to your state senators and representatives. Tony Bennett's agenda is alive and well in the state legislature.

Other articles about the Indiana Election

The Most Important Education Vote Yesterday

A call for Obama to change course on ed reform