It Is Not Daydreaming

There are, however, facts about ADHD which dispel the myths.

First and foremost, ADHD is real. The diagnosis of ADHD as defined in the DSM-5 is very specific. Important things to remember which many people don't know…and which doctors might overlook, are:
In other words, a child of 4 who runs around a lot, climbs on furniture, and has a short attention span is very likely acting like a 4-year-old, and not a child with ADHD. An 8 year old who is under stress from family dysfunction, illness or childhood depression and can't pay attention in class should probably not be diagnosed with ADHD.

ADHD in children should not be diagnosed unless the symptoms are inappropriate to the child's age. 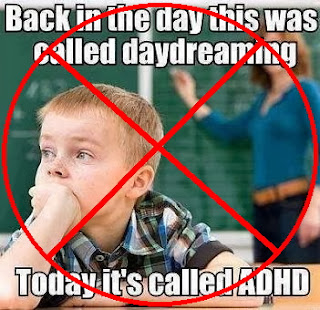 Wrong. "Back in the day" ADHD was called
ADHD is not a new disorder. It has been present in medical literature since the late 18th century. Treatment of the condition with stimulant medications has also been present for almost a century.

ADHD in children should not be diagnosed unless the symptoms are inappropriate to the child's age.

It is not the same as daydreaming.

ADHD has been recognized as a legitimate diagnosis by major medical, psychological, and educational organizations, including the National Institutes of Health and the U.S. Department of Education. The American Psychiatric Society recognizes ADHD as a medical disorder in its Diagnostic and Statistical Manual of Mental Disorders - the official mental health "bible" used by psychologists and psychiatrists.

Attention-deficit hyperactivity disorder (also known as attention-deficit disorder) is biologically based. Research shows that it's a result of an imbalance of chemical messengers, or neurotransmitters, within the brain. Its primary symptoms are inattention, impulsiveness, and, sometimes, hyperactivity.

People with ADHD typically have a great deal of difficulty with aspects of daily life, including time management and organizational skills.

Although it's been estimated that 6 percent of the adult population has ADHD, the majority of those adults remain undiagnosed, and only one in four of them seek treatment. Yet, without help, adults with ADHD are highly vulnerable to depression, anxiety, and substance abuse. They often experience career difficulties, legal and financial problems, and troubled personal relationships.

Myth #5: ADHD is the result of bad parenting

When a child with ADHD blurts things out or gets out of his seat in class, it's not because he hasn't been taught that these behaviors are wrong. It's because he cannot control his impulses. The problem is rooted in brain chemistry, not discipline. In fact, overly strict parenting - which may involve punishing a child for things he can't control - can actually make ADHD symptoms worse. Professional interventions, such as drug therapy, psychotherapy, and behavior modification therapy, are usually required.

Myth #6: Children who take ADHD medication are more likely to abuse drugs when they become teenagers.

Actually, it's just the opposite. Having untreated ADHD increases the risk that an individual will abuse drugs or alcohol. Appropriate treatment reduces this risk.

The medications used to treat ADHD have been proven safe and effective over more than 50 years of use. These drugs don't cure ADHD, but they are highly effective at easing symptoms of the disorder. The drugs do not turn kids into addicts or "zombies."

9 Myths, Misconceptions and Stereotypes about ADHD

5. Myth: “Everyone has some ADHD these days,” Tuckman said.

Fact: Our technology-driven society has definitely caused many people to get easily distracted and overwhelmed. We get sidetracked during one project and feel forgetful about everything else. But as Tuckman clarified: “The difference is that people with ADHD pay a much higher price for their distracted moments and it happens much more often.”

Think of it this way: All of us feel anxious and depressed at certain points in our lives but that doesn’t mean that we have a diagnosable anxiety disorder, depression or bipolar disorder.

Fact: This couldn’t be further from the truth. Individuals with ADHD typically struggle in all areas of their lives, from the big responsibilities like job performance to simple tasks like paying bills on time, according to Tuckman. ADHD is also tough on relationships.

Plus, “There has even been research showing that people with ADHD have lower credit scores and higher blood cholesterol levels, revealing their difficulties with managing a broad range of lifestyle matters,” Tuckman said.

Fact: While effort is important in overcoming obstacles caused by ADHD, it isn’t the whole story. Tuckman likened the misconception of working harder in ADHD to poor eyesight: “We don’t tell someone with bad vision that he just needs to try harder to see well.”

He added that: “People with ADHD have been trying harder their entire lives, but don’t have as much to show for their efforts. This is why it’s important to address ADHD with appropriate treatment and ADHD-friendly strategies that take into account how the ADHD brain processes information.”

Myth: There is no such medical condition as ADHD.

ADHD is a medical disorder, not a condition of the child's will. A child with ADHD does not choose to misbehave.

Myth: ADHD is caused by bad parenting. All the child needs is good discipline.

ADHD is not caused by bad parenting. But parenting techniques can often improve some symptoms and make others worse.

Myth: Medicine prescriptions for ADHD have greatly increased in the past few years because the condition is being overdiagnosed.

ADHD is estimated to affect about 3% to 7% of all school-age children in the United States.1 There is little evidence to support claims that ADHD is overdiagnosed and that ADHD medicines are overprescribed.

Myths and Misconceptions About ADHD: Science over Cynicism

from the National Center for Learning Disabilities

Myth #1: ADHD Is Not a Real Disorder

According to the National Institutes of Health, the Surgeon General of the United States, and an international community of clinical researchers, psychiatrists and physicians, there is general consensus that ADHD is a valid disorder with severe, lifelong consequences. Studies over the past 100 years demonstrate that ADHD is a chronic disorder that has a negative impact on virtually every aspect of daily social, emotional, academic and work functioning. It is a real disorder with serious consequences.

It is difficult to find evidence that ADHD is over-diagnosed or that stimulant medications are over-prescribed. Moreover, in some cases ADHD may be undiagnosed and/or untreated. Rates vary depending on the rating scales employed, the criteria used to make a diagnosis, the use of cut-off scores, and changes in diagnostic criteria.

Changes in special education legislation in the early 1990s increased general awareness of ADHD as a handicapping condition and provided the legal basis for the diagnosis and treatment of ADHD in the school setting. These legal mandates have increased the number of school-based services available to children with ADHD and may have inadvertently led some to conclude that ADHD is a new disorder that is over-diagnosed.

Myth #4: Children With ADHD Are Over-Medicated 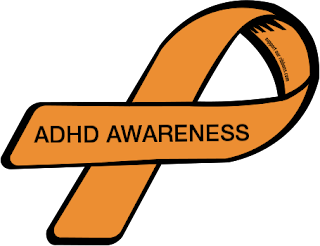 Email ThisBlogThis!Share to TwitterShare to FacebookShare to Pinterest
Labels: ADHD