Teach for America started out as a kind of Peace Corps for Education where high achieving college graduates volunteered to spend two years in hard to staff schools. Lately, though, it's become a source of temporary workers replacing laid off veterans in order to save money for cash-strapped school systems.


No longer are TFA corps members only filling spots that would otherwise go to long-term subs. In some districts TFAers are replacing veteran teachers who have been let go.

With school systems turning to Teach for America for cheap labor, and states passing anti-teacher legislation such as curtailing teachers' collective bargaining rights (Indiana, Wisconsin), and due process rights (North Carolina, Indiana), is it any wonder that the prospect of a teacher shortage has the nation's public schools worried? 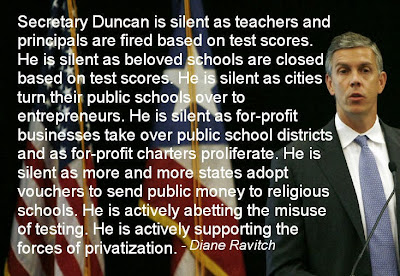 Yes, this is Arne Duncan's US Department of Education…the same Arne Duncan who cheered when an entire school teaching staff was fired.


According to the Department of Education, as many as one million teachers could retire in the next four to six years. Hoping to attract young, high-achieving college graduates — particularly in science, math and engineering — the campaign, called Teach, uses video spots and radio announcements that portray teaching as creative, invigorating and meaningful, and as compelling a career as medicine, acting or engineering.

Does Duncan actually understand what he and his Department have done to the teaching profession? His policies have contributed to the declining morale among the nation's public school teachers. The creativity is being phased out. That which makes teaching meaningful is disappearing. Teaching to tests does not make for a compelling career. To try to convince young people that working conditions are anything but incredibly difficult and demoralizing is disingenuous.


Citing the model of several countries where students regularly score high on standardized tests, Mr. Duncan said that they pull their teaching corps from the top tenth to top third of college graduates. He said he wanted to persuade “very, very high caliber college graduates to come and work in our nation’s schools.”

Does Duncan expect us to believe that after supporting union busting state legislatures and governors, and eagerly participating in the privatization of America's public schools, the Department of Education is now working hard to get more young people to become public school teachers?

I agree we need to recruit good young people to become life-long educators, but we also need to support public schools instead of closing them. We need to support public school educators instead of blaming them for not solving the country's economic and poverty problems. Pardon me for being cynical, but I don't believe that Duncan and the U.S. Department of Education are serious about improving schools or providing a professional education force.

Arne Duncan's tenure as Secretary of Education has been a disaster for America's Public Schools. He needs to be fired.