Yet Another National Shame

The US isn't very good at taking care of its children. Consider these shameful facts... 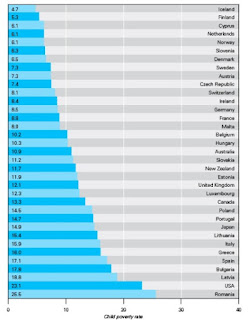 Now we can add a third mark of shame to our national report card. The National Center for Homeless Education of the US Department of Education reports that the number of homeless students attending preschool through grade 12 during the 2011-2012 school year (1,168,354) was the highest ever and represented a 10 percent increase over the 2010-2011 school year.

All these facts have an effect on student achievement.


When a child experiences such prolonged hunger and fatigue, he or she isn’t able to come to school ready to learn, as basic needs aren’t being met.

Instead of blaming schools and teachers...instead of closing high poverty schools...instead of cutting funding for public education...we should hold policy-makers and politicians accountable. As John Kuhn wrote...


The age of accountability should be renamed the age of blame, when teachers wear the scarlet letter for the failings of a nation. We send teachers into pockets of poverty that our leaders can’t or won’t eradicate, and when those teachers fail to work miracles among devastated children, we stamp ‘unacceptable’ on their foreheads.

I ask you, where is the label for the lawmaker whose policies fail to clean up the poorest neighborhoods? Why do we not demand that our leaders make “Adequate Yearly Progress”? We have data about poverty, health care, crime, and drug abuse in every legislative district. We know that those factors directly impact our ability to teach kids. Why have we not established annual targets for our legislators to meet? Why do they not join us beneath these vinyl banners that read “exemplary” in the suburbs and “unacceptable” in the slums?

Teachers are surrounded by armchair quarterbacks who won’t lift a finger to help, only to point. Congressmen, come down out of those bleachers and strive with us against the pernicious ravages of poverty. We need more from you than blame. America’s education problem is actually a poverty problem.

If labels fix schools, let us use labels to fix our congresses! Let lawmakers show the courage of a teacher! Hold hands with us and let us march together into the teeth of this blame machine you have built. Let us hold this congressman up against that congressman and compare them just as we compare our schools. Congressmen, do not fear this accountability you have given us. Like us, you will learn to love it.

When will Americans reach a level of shame that they will insist that accountability be shared?

Not much more needs to be said. 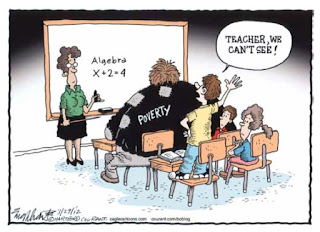