We have two awards to present today. First, a positive one for language usage.

Here's an internet definition of sabotage. It reads,


n. Destruction of property or obstruction of normal operations, as by civilians or enemy agents in time of war.
n. Treacherous action to defeat or hinder a cause or an endeavor; deliberate subversion.
v. To commit sabotage against.

The saboteurs of public education
"...Education Sabotage – because that's really what it is."


Henceforth, “Education Reform” shall be Education Sabotage – because that’s really what it is.

It is about deliberately obstructing goods and services that otherwise would help kids learn and repurposing them for corporate benefit.

Likewise, I propose we stop using the term “School choice.” Instead, call it what it is – School Privatization.

The second award goes to the NRA...for flagrant and unadulterated hypocrisy.

The NRA Convention, set to convene this week in Dallas, has gone along with the Secret Service requirement to ban weapons during Vice President Pence's visit.

The teens at Marjory Stoneman Douglas High School in Parkland, Florida, have called them out for their hypocrisy.


Teens who survived the Feb. 14 mass shooting at Marjory Stoneman Douglas High School in Parkland, where 17 people were killed, are wondering why the NRA fiercely resists extending the same safety considerations to other areas to safeguard children. The NRA wants “guns everywhere” when it comes to kids, tweeted Matt Deitsch, a Parkland student who helped organize the March for Our Lives rally for stricter gun laws in Washington.

Arming teachers seems to be the most popular NRA-backed "solution" to mass school shootings. The Trump administration wants to "harden school security" with

The NRA blames mass shootings on the media and thinks that armed school personnel is the answer to school shootings. As Wayne LaPierre has so famously said,

Did anyone in the NRA notice that they're not allowed to take guns into their own convention? The children at Marjory Stoneman Douglas High School noticed. 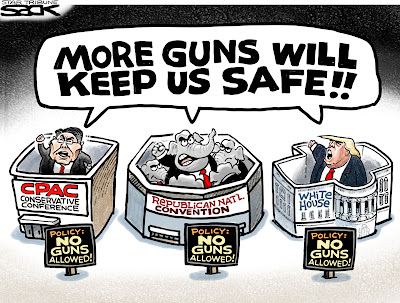