The NFL, The Bill of Rights, and Limits to Freedom

The owners of NFL football teams have agreed to require players to either stand during the singing of the national anthem, or stay in the clubhouse. Teams will face fines for any infractions of the new rule. Kudos to Jets owner, Christopher Johnson, who announced that he would pay his team's fine if any players chose to kneel rather than stand.

Is this a free speech issue? Possibly...but it's under debate because freedom of speech is not absolute in the United States. We have the First Amendment which guarantees free speech (among other things), but there are restrictions that most reasonable people would agree with. Furthermore, with free speech comes responsibility and consequences. You can't just say anything you want without accepting the consequences of your words. Colin Kaepernick understands and (mostly) accepts that his gesture of protest against racism and police violence in the United States has consequences (though he is fighting some of the consequences). In other words, there are limits to the First Amendment. 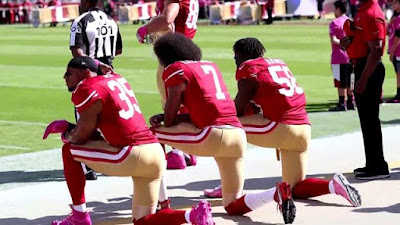 Congress shall make no law respecting an establishment of religion, or prohibiting the free exercise thereof; or abridging the freedom of speech, or of the press; or the right of the people peaceably to assemble, and to petition the Government for a redress of grievances.

Freedom of Speech and Press: Exceptions to the First Amendment


...an overview of the major exceptions to the First Amendment—of the ways that the Supreme Court has interpreted the guarantee of freedom of speech and press to provide no protection or only limited protection for some types of speech. For example, the Court has decided that the First Amendment provides no protection for obscenity, child pornography, or speech that constitutes what has become widely known as “fighting words.” The Court has also decided that the First Amendment provides less than full protection to commercial speech, defamation (libel and slander), speech that may be harmful to children, speech broadcast on radio and television (as opposed to speech transmitted via cable or the Internet), and public employees’ speech.

How much can your employer restrict your free speech? The answer, in a nutshell, is "a lot" if you're a government employee..."not as much" if you're not. 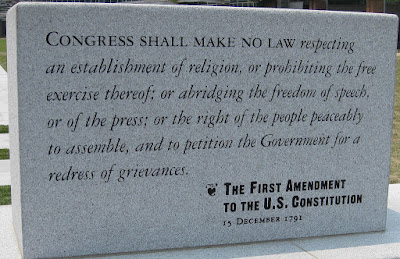 Can The NFL Really Fire Players For Kneeling During The National Anthem?


Employee freedom of speech depends on many different laws...

NFL teams are probably private actors, which would mean players do not have constitutional free speech rights in this situation; however, there are some bona fide arguments to the contrary...

As an individual, when you're not at work, you have the full rights to free speech (with restrictions and consequences as noted above). As an employee, however, when you are essentially representing your employer, there are more restrictions and that's where the complications come into play.

On the other hand, those opposed to the protests don't seem to grasp the irony of heaping scorn upon individuals who are exercising the rights guaranteed by the Constitution. President Trump, who rarely lets pass an opportunity to whip up nationalist fervor, said this about the NFL players who exercise their First Amendment rights by kneeling during the national anthem...

To give him the benefit of the doubt, the President apparently doesn't understand the First Amendment. American citizens have the right to do or say things which are offensive (again, with certain restrictions). It's fine if he wants to disagree, but that doesn't mean that they should be fired, deported, or exiled. 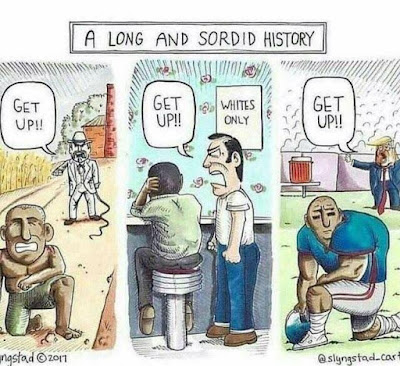 DO STUDENTS HAVE FIRST AMENDMENT RIGHTS?

The protests have moved from the world of professional sports to high schools and colleges. Students around the country are exercising their first amendment rights and kneeling in support of the professional athletes and in protest against the depth of racism in America.

Is this legal? Can high school and college students do the same thing or do they "leave their rights at the schoolhouse door?"


AURORA, Colo. — Vicqari Horton dropped a knee to the grass. The varsity choir piped out “The Star-Spangled Banner.” And in the bleachers at a sun-soaked football stadium here on Saturday, parents clenched their teeth in anger or raised their fists in support.

“You can’t continue to slap people in the face and not expect them to stand up,” said Mr. Horton, a junior tight end at Aurora Central High School who is black and began kneeling during the national anthem at games in mid-September. “When Kaepernick kneeled, he gave us an outlet. He gave us something to do.”


Two Texas high school football players were thrown off their team literally moments after kneeling in protest during the national anthem before a game on Friday.

The two teens from Victory and Praise Christian Academy in Crosby, Texas planned the protest in advance -- and even told their coach -- who immediately asked his players to take off their uniforms and booted them off the team... 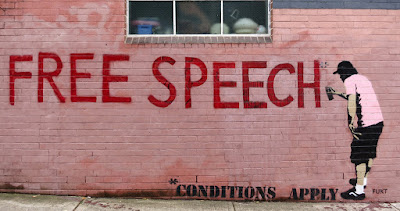 Limits to the Fourth Amendment

Limits to the Eighth Amendment

Many of those who are arguing that the First Amendment rights of Kaepernick and others be restricted while they are in their football uniform are the same ones who claim the Second Amendment is not subject to any restrictions.

The limits of the Second Amendment


In short, every right has its limits. And that's exactly what the Supreme Court suggested on Monday, when it declined to hear an appeal of a suit against a law in Highland Park, Illinois, that banned assault weapons and high-capacity magazines in the town. Not only did the court hand gun rights advocates a loss, the vote was 7-2, including Chief Justice John Roberts and Justice Samuel Alito, both of whom had voted in 2008 to create an individual right to own guns for the first time in American history.

What everybody needs to know about our Constitution and gun control


Even conservative Supreme Court Justice Antonin Scalia acknowledged this in his opinion to Heller. He wrote that the Second Amendment is “not unlimited” and is “not a right to keep and carry any weapon whatsoever in any manner whatsoever and for whatever purpose.”

Does it make sense to adopt reasonable limits to free speech, but not to gun ownership? Can you pick and choose which amendments should be restricted and which ones shouldn't?

[Note: As I was writing this another school shooting was being reported...in Noblesville, IN]

Are those people who are calling for NFL players to "stand up for the national anthem or leave the country," willing to fight for similar restrictions to gun ownership?